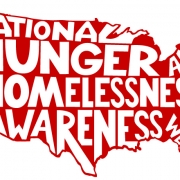 At White Glove Moving we are proud to be Move for Hunger Movers. This Thanksgiving season, we are helping promote and contribute to the food drive for National Homeless & Hunger Awareness Week which lasts from Nov. 16th-22nd; however, efforts will be made through Nov. 30th to encourage businesses and individuals to get involved.

Want to host a food box and have visitors as well as staff help to fill it? Please call Anna at 772-232-7843 to be added to the distribution list. Pick up will be at the discretion of White Glove Moving once the boxes are full.

Why are people homeless?

A lack of affordable housing and the limited scale of housing assistance programs have contributed to the current housing crisis and to homelessness. Recently, foreclosures have also increased the number of people who experience homelessness.

The National Low Income Housing Coalition estimates that the 2013 Housing Wage is $18.79, exceeding the $14.32 hourly wage earned by the average renter by almost $4.50 an hour, and greatly exceeding wages earned by low income renter households.

Homelessness and poverty are inextricably linked. Poor people are frequently unable to pay for housing, food, childcare, health care, and education. Difficult choices must be made when limited resources cover only some of these necessities. Often it is housing, which absorbs a high proportion of income that must be dropped. If you are poor, you are essentially an illness, an accident, or a paycheck away from living on the streets.

Other major factors, which can contribute to homelessness, include:

Want to join the discussion?
Feel free to contribute!